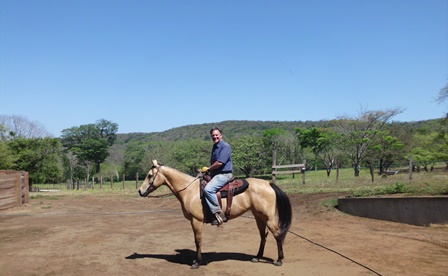 I am a farmer/agroforestry expert and International Policy Consultant. Besides my business ventures, I've worked almost 30 years with non-profits in various capacities and currently serve on several boards. Although my focus has been Mesoamerica and Alta California, I have consulted with more than a dozen countries in the areas of agriculture, health, and education reform. I can also claim to both exposing the oppresive policies of USAID, and consulting for USAID to promote sustainable development. Governments come and go, people live with the consequences of both good and bad policy!

While finishing up my college education I taught 3rd grade as a bilingual teacher in the Pomona Unified School District in 1985. I returned to Costa Rica in June of '85 and spent a year managing a farm belonging to my father-in-law. At the end of '86 my grandfather lent me $10,000 for a down payment and with seller financing I purchased my own farm -- the Finca Colibrí. The farm provided a base from which I was able to pursue various activities -- for three years I ran a small dairy and sold products at local farmers markets; after Nicaragua's first democratic elections in '84, together with my mother we transformed the Institute for Central American Studies into an educational institute that provided various programs for thousands of college and post-college students; after President Oscar Arias won the Nobel Peace Prize in '87, tourism became an important economic activity and I collaborated with various agencies to develop a world-leading ecotourism industry; in '89 I was hired by WorldTeach, a project of the Harvard Institute for International Development, to establish a countrywide program of ESL instruction in rural public high schools; and '91-'92 I was the executive director of Audubon of Costa Rica.

In '92 my wife decided to pursue post-graduate studies at Columbia University, and during a little over a year of living in Manhattan I gained experience working in finance for non-profits from both the grantee and grantor sides of development, with organizations such as the Lila Wallace Readers Digest Fund and the National Audubon Society. In December of '93 I took a job as Grants Manager for the YMCA of San Francisco, where I developed AmeriCorps programs for the Bay Area's largest social service agency, as well as contributed to the overall development team. After joining me in the Bay Area, my wife continued her doctoral studies at UC Berkeley and began working with the Public Health Institute, resulting in our move to Santa Cruz where we worked with International Health Programs until 2001.

By the end of '01 we decided to make some life changes -- we had sold Finca Colibrí and purchased property near the Guanacaste Conservation Area in Costa Rica, and my wife was caught up with the happenings of 9-11, narrowly escaping events of that disastrous day. We cut back on international consulting and travel schedules of nearly 50% of our time, and in '05 we moved from Santa Cruz to Marin County. Our first child was born in '04, followed by our second in '06. Our current challenge is raising teenagers in a changing climate.